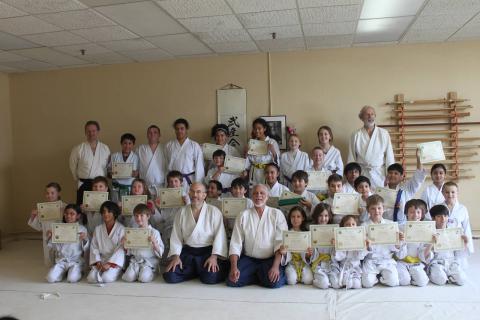 Fairfield Aikikai School of Aikido is a small aikido dojo in Fairfield, Iowa. Fairfield Aikikai is a club of like-minded individuals who get together to study Aikido and it's principles of harmony and blending. We invite you to join us.

...Aikido is not primarily a system of combat, but rather a means of self-cultivation and improvement

What is aikido?
Created in Japan by Morihei Ueshiba (1883-1969), Aikido is a relatively recent innovation within the world of martial arts, heir to a rich cultural and philosophical background. Before creating aikido, Ueshiba trained extensively in several varieties of jujitsu, as well as sword and spear fighting. Ueshiba also immersed himself in religious studies and developed an ideology devoted to universal socio-political harmony. Incorporating these principles into his martial art, Ueshiba developed many aspects of aikido in concert with his philosophical and religious ideology.

Aikido is not primarily a system of combat, but rather a means of self-cultivation and improvement. Aikido has no tournaments, competitions, contests, or "sparring." Instead, all aikido techniques are learned cooperatively at a pace commensurate with the abilities of each trainee. According to the founder, the goal of aikido is not the defeat of others, but the defeat of the negative characteristics which inhabit one's own mind and inhibit its functioning.